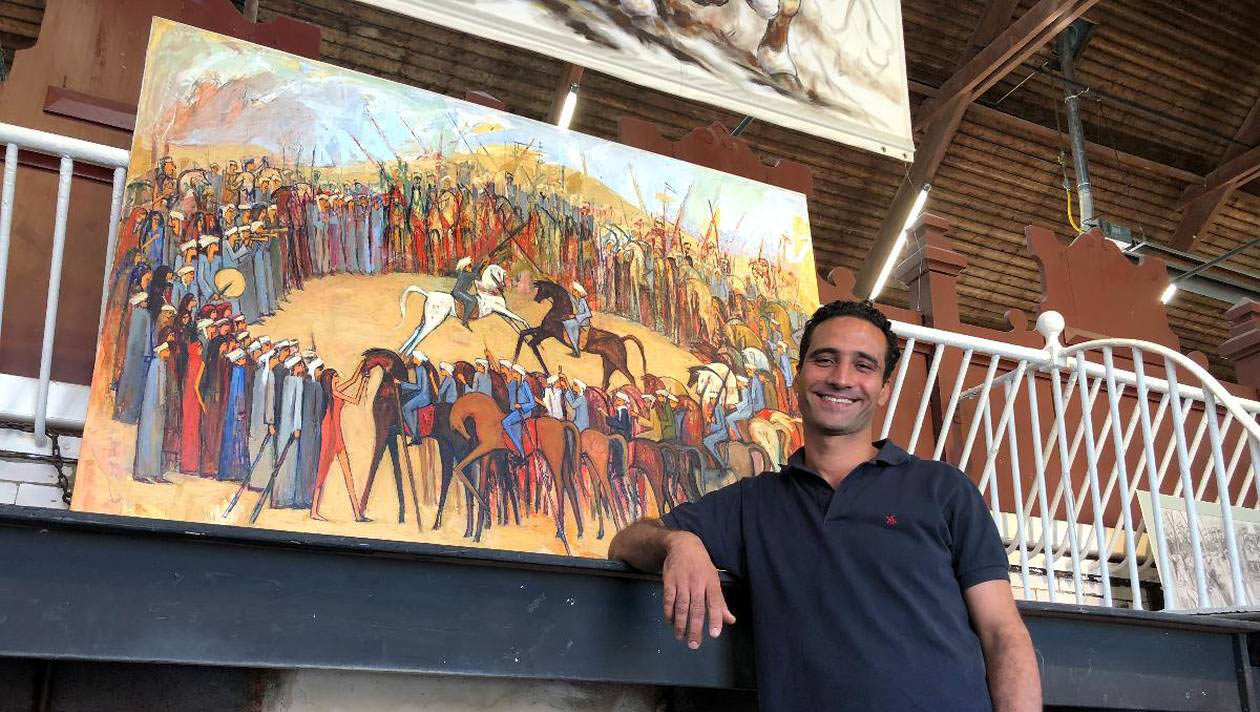 Alaa Awad علاء عوض
Alaa Awad is a virtuoso painter based in Luxor, Egypt, famous for his public art. During the Egyptian Revolution he created murals in Cairo and captured the attention of the media and the world, such as his depiction of a funeral march and wailing women on the walls of the city which came to represent the grief and outcry of the entire country. His style is both an ode to ancient Egyptian pharaonic artwork and the living heritage of rural life that still can be found in places like Luxor’s West Bank, full of celebratory colors, spirited traditions, and the vibrations of community. The essence of his paintings honors Egypt past and present, and yet is uniquely his own style and totally contemporary; there is no mistaking an Alaa Awad painting.
In 2012, Alaa achieved global attention with his Cairo public art murals on Mohamed Mahmoud Street created during the Egyptian Revolution. Encapsulating the raw passion and tireless energy of the protestors and the people’s indignation, Alaa expressed the emotions of the moment directly into his street murals, which stood apart but united with the graffiti that became visually symbolic during the protests. He has since been included in numerous publications and articles about the contemporary art scene in Egypt, such as Revolution Graffiti: Street Art of the New Egypt (AUC Press, 2013).
In 2019, Alaa received his PhD from the South Valley University, Faculty of Fine Arts. His dissertation was entitled Artistic Vision Inspired by the Murals of War and Peace in Ancient Egyptian Art, an Empirical Study: How the Ancients Preserved and Interpreted Life and Political Events in Mural Painting and Relief. Researching the ancient artwork directly from the temples themselves in Luxor, Alaa presents a valuable perspective on the role of art in a civilization, to express the human experience in the most powerful, direct means possible, regardless of language or literacy, through massive murals.

Uninhibited by scale or materials, Alaa Awad has painted on everything from city walls to canvases, exploring ceramic tiles, glass, and mosaics. Without stencils or spray paints, he uses a brush and acrylic paints for his murals, creating all his paintings by free hand.
Thematically, his work is inspired by ancient Egypt’s monumental artworks found in the immense, astonishing temples of Luxor, and in the tombs of kings and queens. He uses techniques directly from the ancients, such as figures shown in profile, or massive scenes of battles and celebrations taken straight from the temple walls. His colors also share a reminiscent ancient palette influenced by the Egyptian environment, with vivid tones and vibrant contrasts: intense red and yellow ochres against turquoise greens and lapis lazuli blues. His personal touch is strictly his own however, using a confident brush line to sketch out his intricate images. And all his figures—from gods to people, deities to animals—are elongated into majestic forms that are uniquely his own style.
It is through his depictions of the people, in epic gatherings, marches, and crowds, that he encompasses his message of community and history, and the dignity and charisma of all Egyptians, both past and present. He presents the people in numerous kinds of scenes: mythological conflicts and ancient battles, Sufi ceremonies and celebrations, suqs and animal markets. All his artwork has a timelessness, reminding one how little the Egyptian people have changed over millennia, in their day-to-day lives, and in their glorious spirits. (Text by Dominique Navarro) 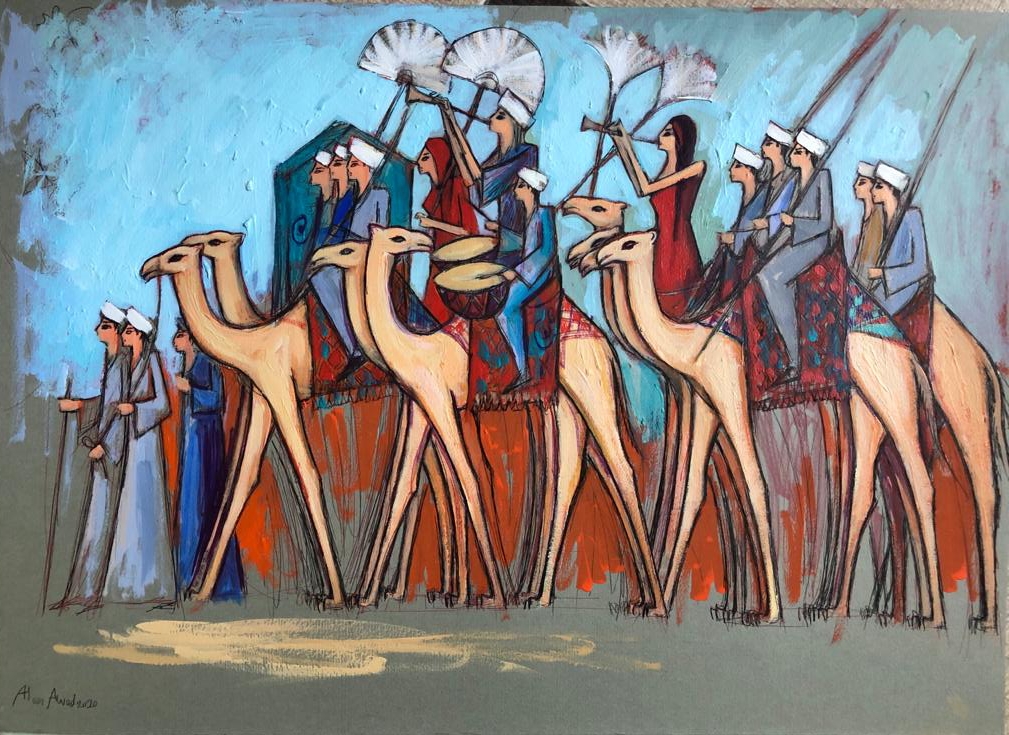 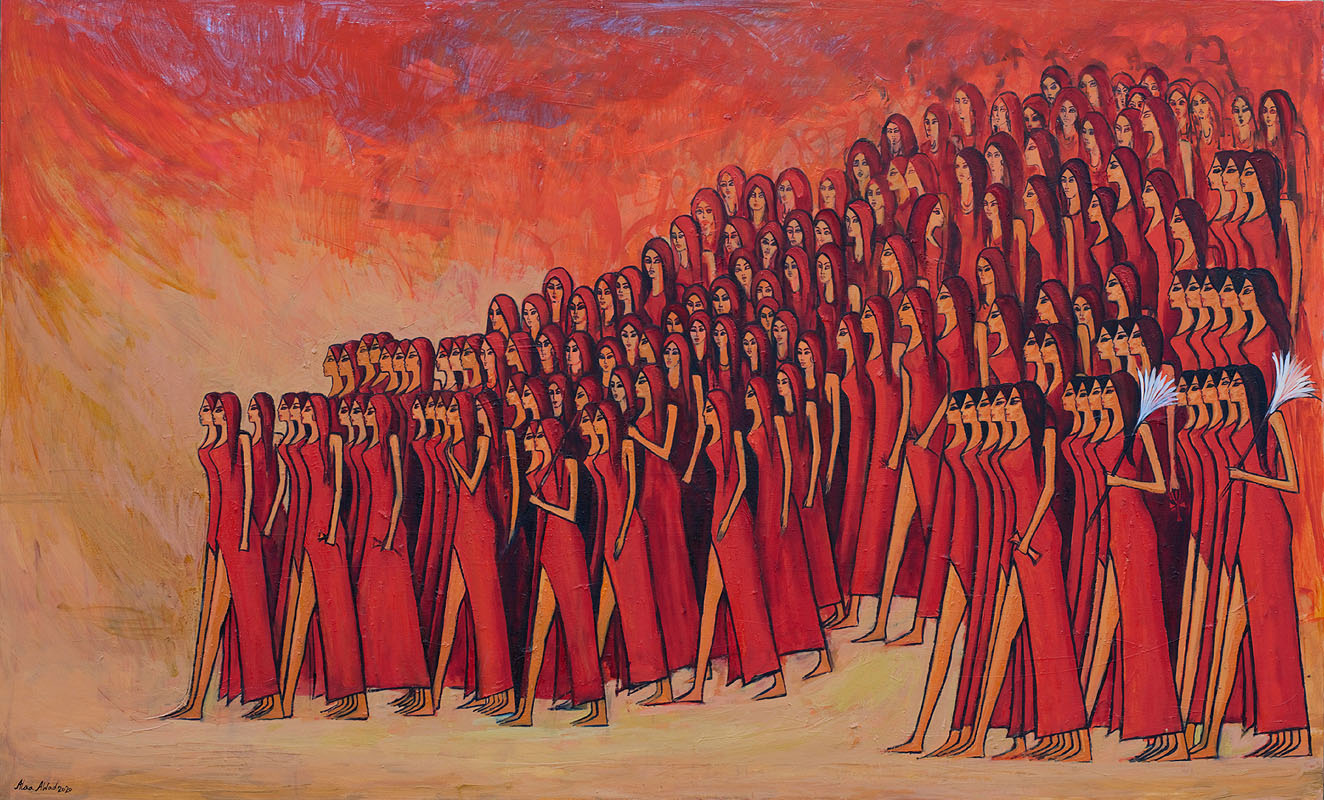 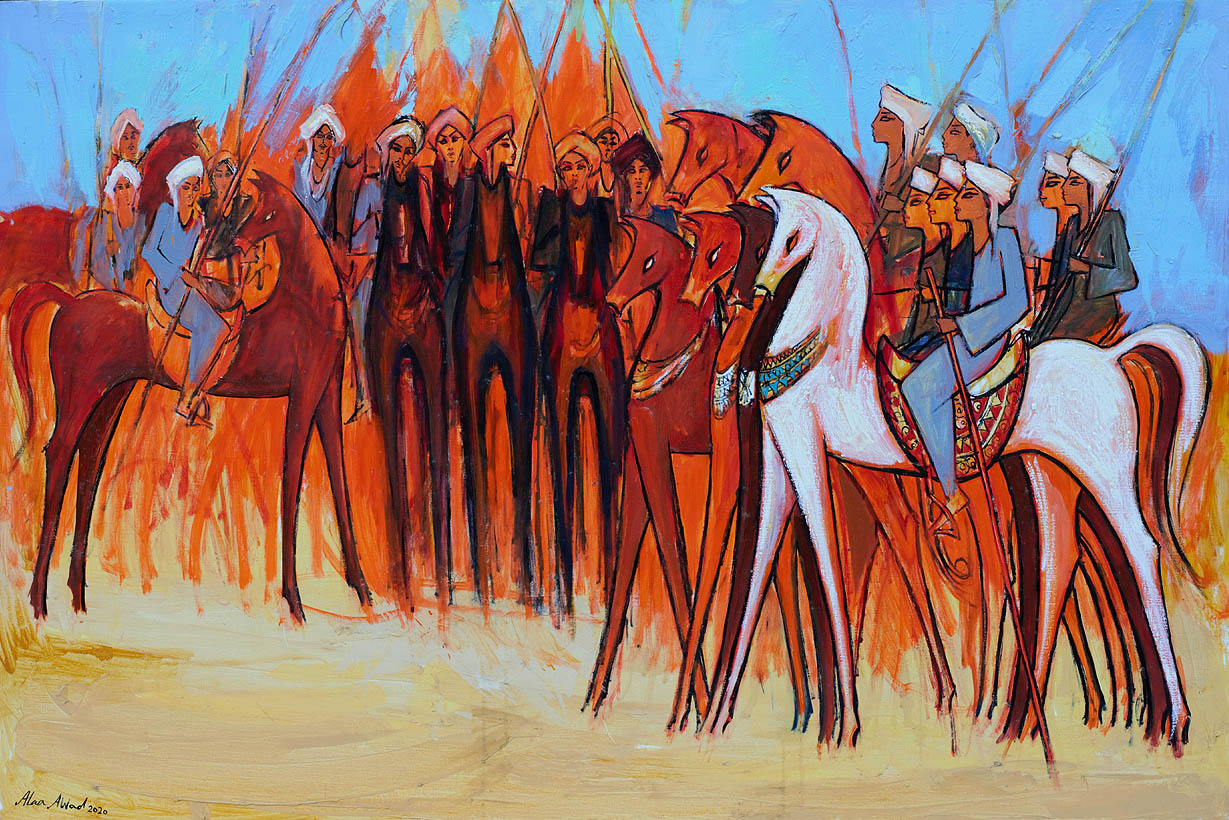 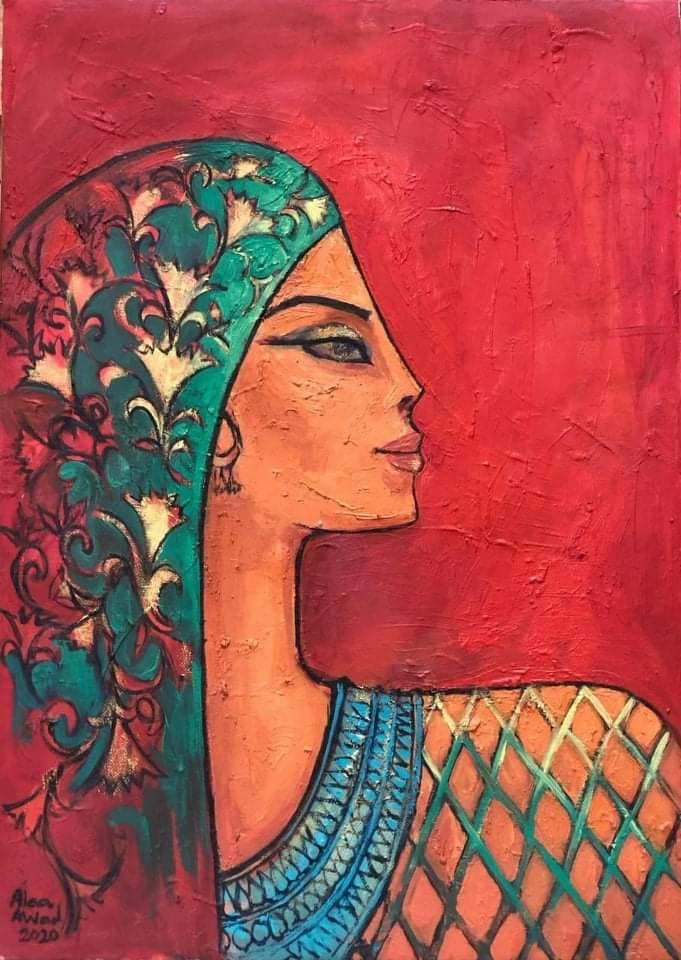 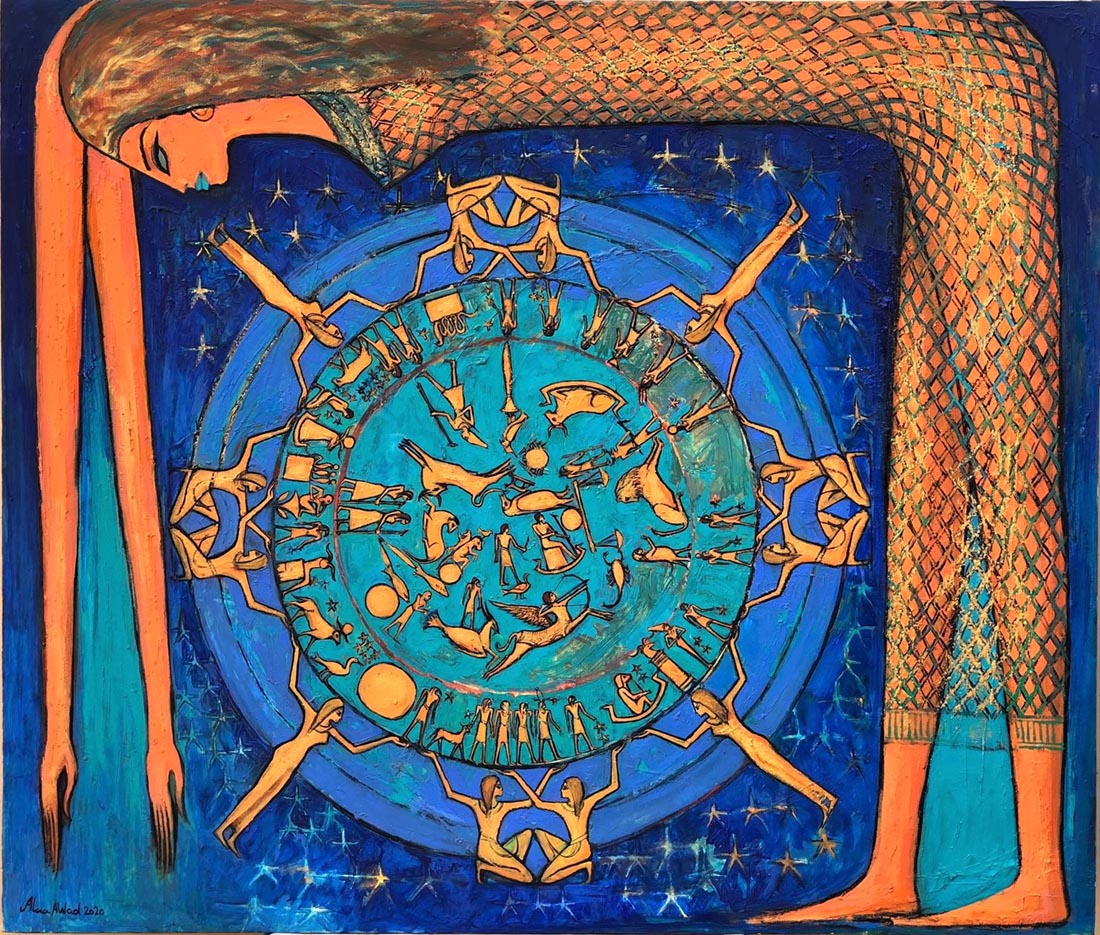 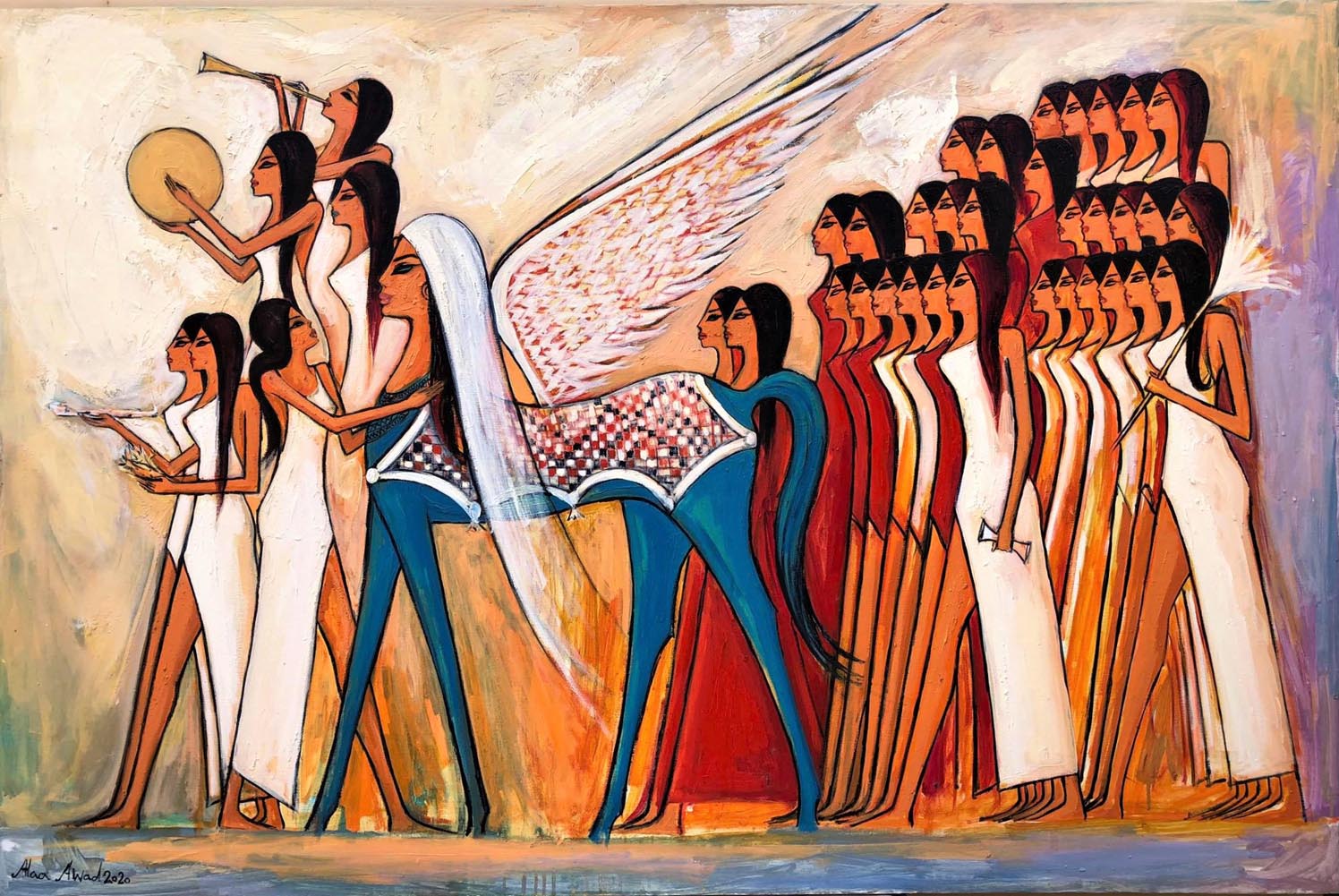 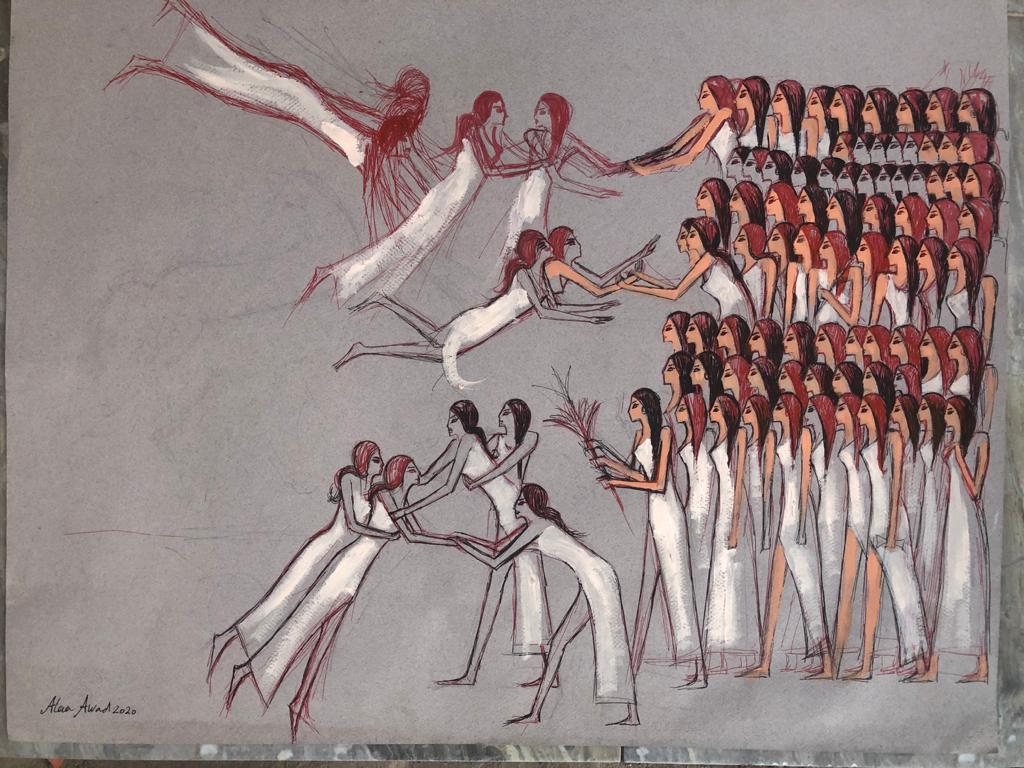 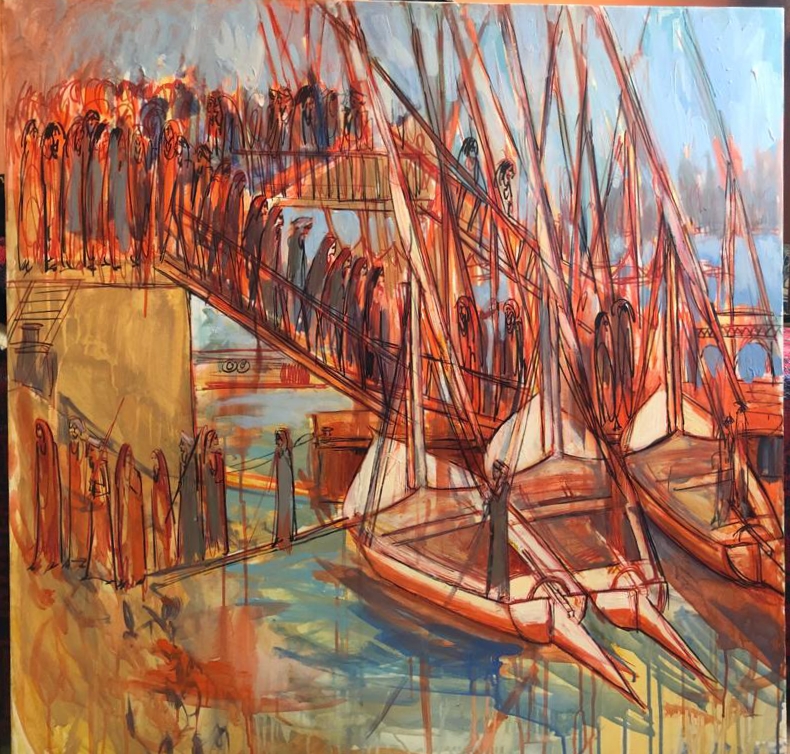 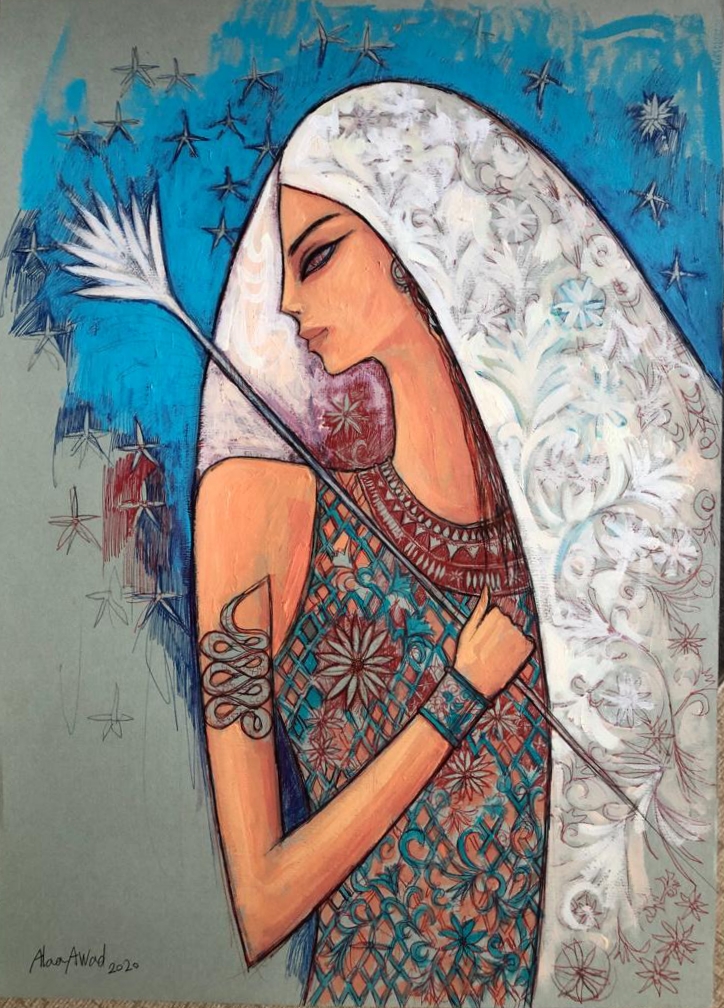 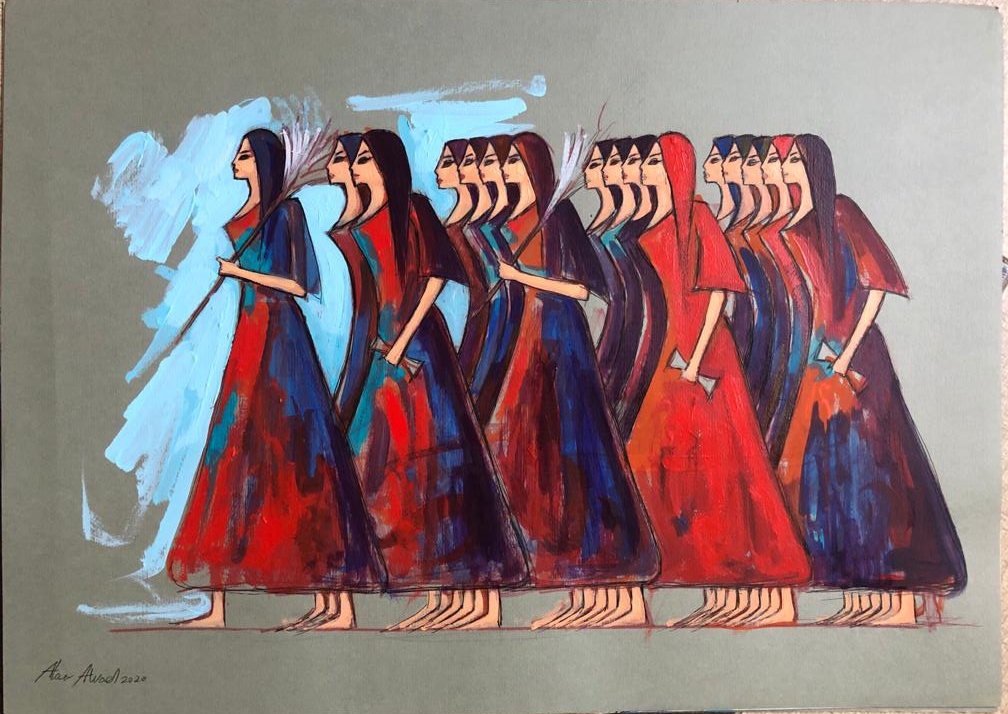 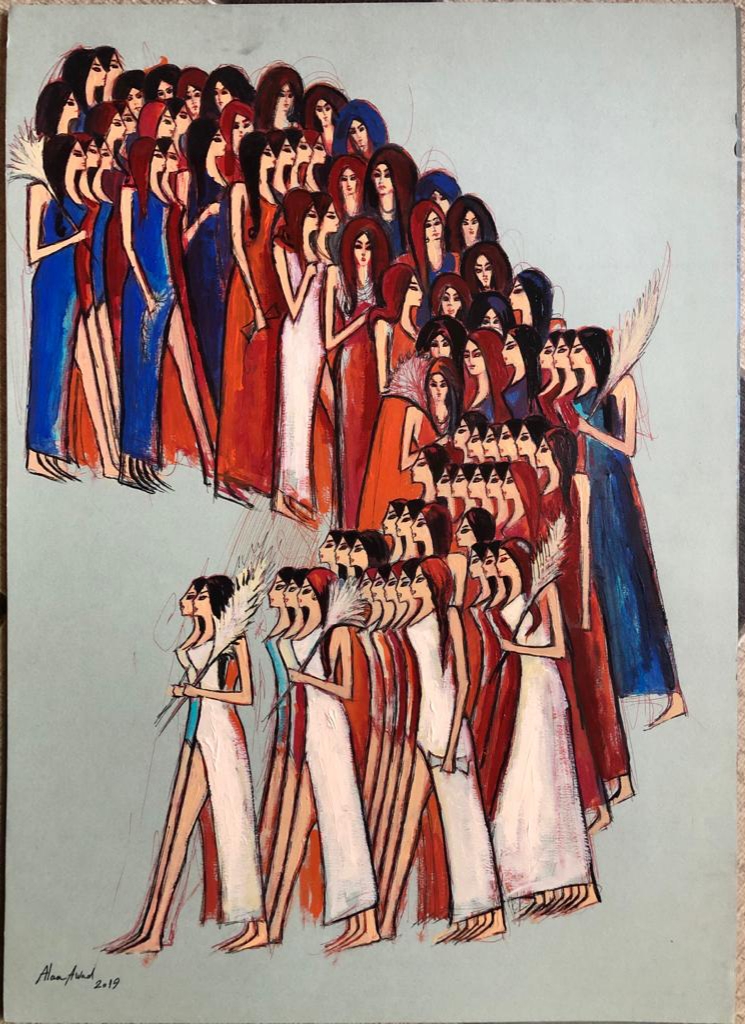 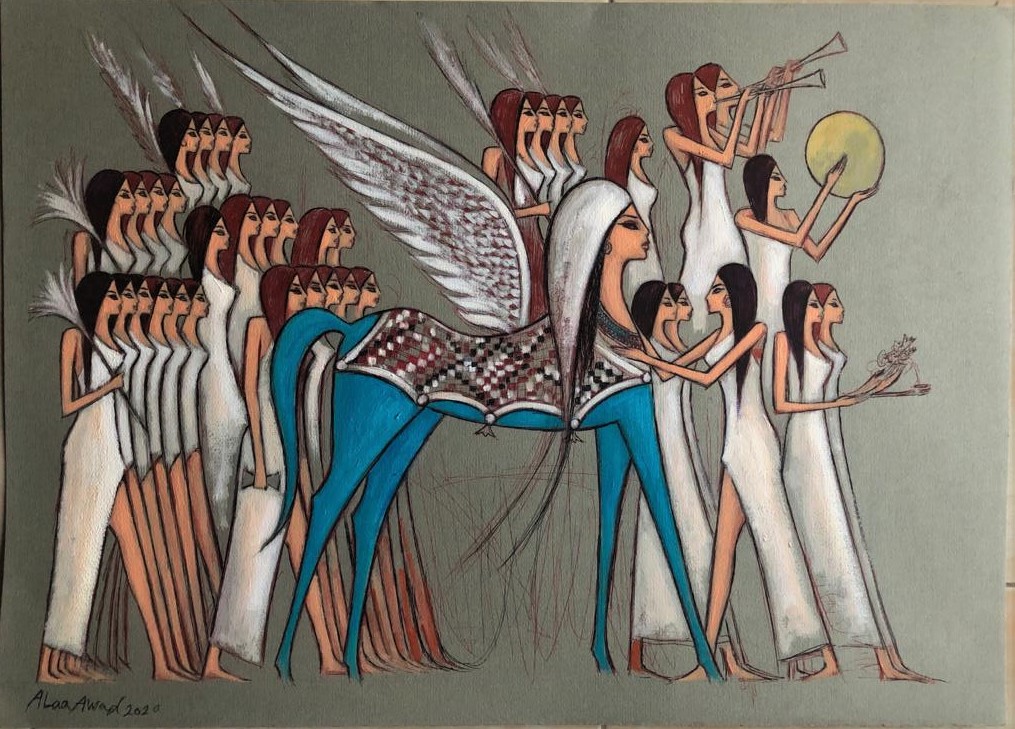 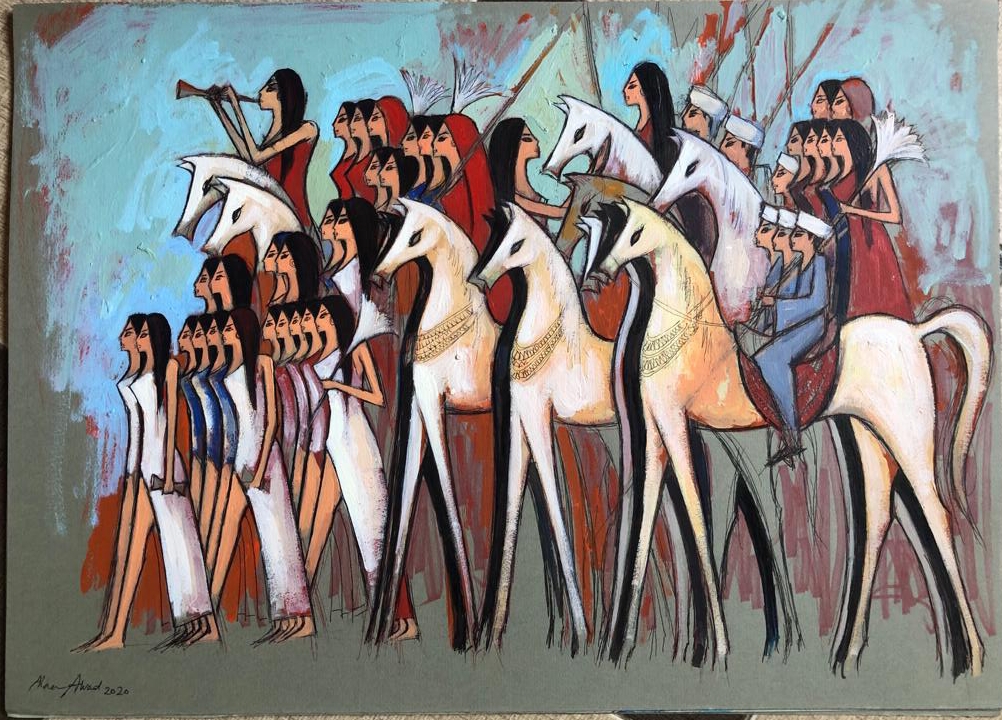